TEXT re:  A “université populaire” and school of the arts, the PLURIversity cross-seeds artistic, P2P and social imaginaries to develop new pedagogies, skills and solutions for a diverse, pluricultural future.

THE PLURIVERSITY IS A PERPETUUM MOBILIZATION. PERPETUUM MOBILE WAS CO-FOUNDED BY IVOR STODOLSKY AND MARITA MUUKKONEN IN 2007. PHOTO: YLE/EVA PURSIAINEN
While cultural pluralism in Finland is a fruitful reality, recent regressive forces have attempted to undermine and attack the notion of “multiculturalism”. Nevertheless, the integration of recent first-generation immigrants has demonstrated considerable successes, and historical minorities are a long-established part of society. How can one create a learning-by-doing platform which brings together a plurality of individuals, cultures and traditions – a university of “pluricultural” life which holds a strong appeal to a new generation?The PLURIversity is initially intended for its participants – and that’s potentially everyone. We are engaging local youth, associations, communities and cooperative initiatives to co-develop new models. With the hope and enthusiasm generated so far, here some preliminary field reports from the ongoing learning-by-doing “faculties”.

An Open “Co-op of Co-ops” for Helsinki?

The re-making and survival of co-operative forms in the 21st century, in the midst of an aggressive but failing neoliberal model, is the source of great new synergies. Much has been happening in the world of open/integral cooperatives, alternative currencies, open source communities, solidarity and real-sharing economies. To get things started, we thus invited the widest spectrum of people engaged in this process, mainly in Finland, along with some international speakers, to share their experiences and strategies.

The faculty of PLURIeconomy, rather than re-invent the wheel, seeks to coordinate pre-existing cooperative ventures while bringing in younger participants. It’s most ambitious aim is to build a “co-op of co-ops” in Finland. Should this, we asked, be modelled on existing experiences such as the Catalan Integral Cooperative (CIC) or other experiments in “open” or “integral” co-operativism? While mapping existing initiatives, we began to build momentum to build new structures: from that of an informal association or network, to true economic cooperation using alternative currencies. Further ideas are now on the table, such as creating a Commons Assembly for Finland (for individuals), a Chamber of the Commons (for commons enterprises) and a special youth section.

A diverse set of commoners-participants from all walks of life joined: from DIY-enthusiasts to theatre artists, members of Commons.fi, Aika Pankki, Pixelache, YMBIcon, Open Knowledge and, of course, Perpetuum Mobile and its faculty anchor Pedro Aibeo. During the August-September sessions, Sheiko Reito, the Malaysian visual artist and graphic designer, held several meeting in preparation for the first PLURIculture project. She developed ideas focussed on the trans-gender experience, with associations such as Transtukipiste. As a result, the first public Transendence workshop is scheduled to take place at the Galleria Third Space on 12 November, 2016, with a special focus on trans-identity of youth and young adults.

Other PLURIculture projects are still under wraps 😉

Developing the ‘curriculum’ of the first year of the faculty of PLURImedia, the visual artist Juan Pedro Fabra Guemberena together with local anchor Ossi Koskelainen (the theatre director and dramaturgist) generated a temporary raw media archive. This material will be used as the source of several new works.

First is the development of an online model archive using OpenStreetMap for connecting for photo-stills, moving images and sound. Workshops for youth participants, allowing them to learn to use this model, will allow them to mediate and communicate their experience of different subjective experiences and suburbs of Helsinki.

Second, the ambitious Kansanedustus project will stage a temporary “parliament” in Vesala (Kontula), addressing the infamous battles between Somali youths and hard-right Skins in the 90’s. Especially the youth of this area will be invited onto a stage, where a camera crew will record the discussion and interventions, retellings, re-stagings, and re-imaginings of what took place and why. This Parliament  is not only interested in the documentary, historical qualities but is interested in its potential as a conductor of new, healing and revealing processes. 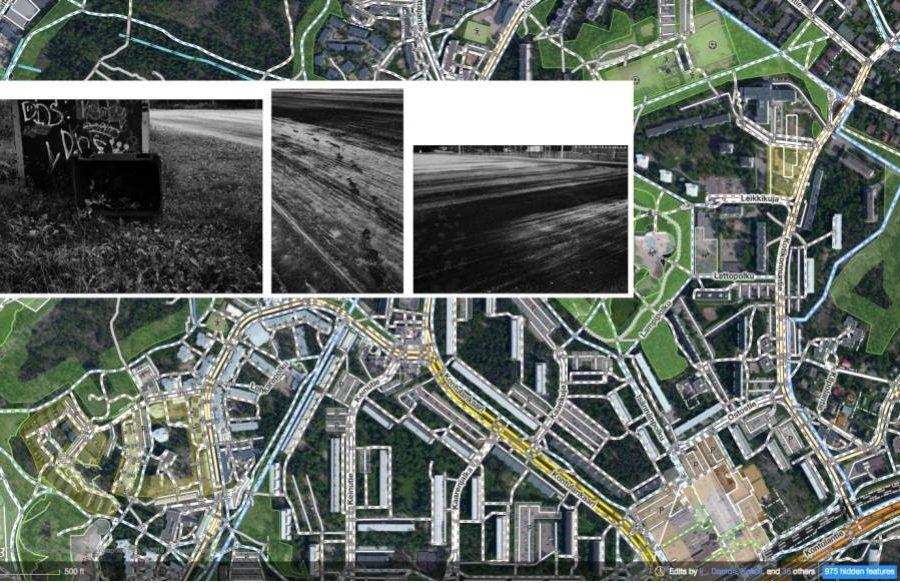 In our time, patenting and homogenizing crops and land is leading to extinctions and loss of diversity on on an unprecedented scale. Agriculture is dominated by four global companies in Turkey, for example, where it is illegal to grow traditional seeds. Focussing on strategies for the preservation of traditional seeds and food sustainability through community, this faculty was launched by Erkan Özgen, the visual artist and ecological activist from in Eastern Turkey (in residence at AR-Safe Haven Helsinki).

Erkan presented the Mesopotamian Ecology Movement, active in 25 Kurdish cities, showing viable alternative strategies, working with youth groups, schools, local communities and even refugee camps. Finnish ecological organisations such as Dodo, Eatable Garden, Bios, Mustarinta and the Finnish nature league were among the actors Erkan met with in the “field” and which attended the workshop. A future “seed festival” was mooted, with the visual artist Egle Oddo invited as a future local anchor, while Luigi Coppola from Lecce will be the next raporteur “from the field”, as it were. The concept of the PLURIstudio, is being developed with Ramy “the singer of Tahrir Square” Essam in consultation with Finnish musicians, including Paleface. Based on a public call, the first workshops will take place in a youth house in late 2016. The aim is to learn to write lyrics, sing a song, record a track, perhaps create a musical…