PRESS: In The Surrounds of History

In The Surrounds of History

Jota Mombaça recently moved to Athens for observing the multiple events surrounding Documenta 14. One of them is an exhibition by the initiative “Artists at Risk”. 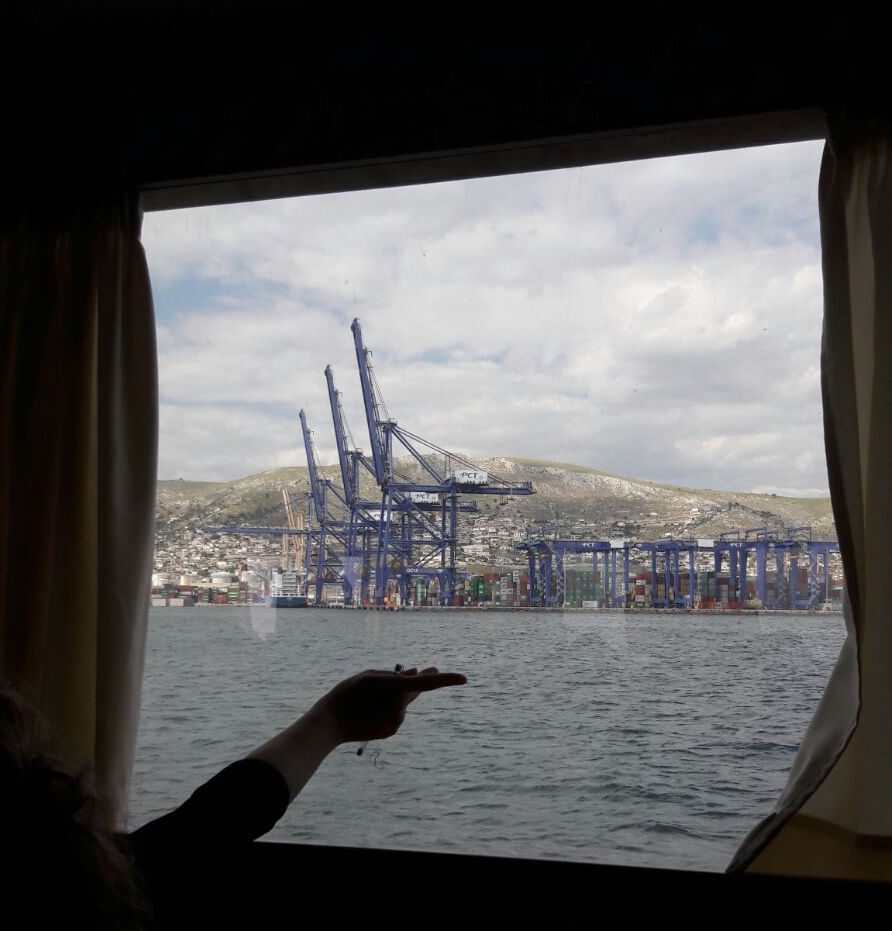 Through the window of the Boat of History. The Parliament of Bodies, Documenta 14. Photo by and courtesy of Nikos Doulos*

The first scene of this meditation starts on a boat. Not the overrepresented boat of the so-called refugee crisis in Europe, but a different one, named The Boat of History. It is part of Documenta 14’s public program. Anna Papaeti’s speaks about music, torture and exercises of military power within Greek prison camps, a later talk addresses the crucial dilemma on how certain histories of suffering and resilience becomes untold. And just there, somewhere in the Mediterranean sea, within the floating institutionality of the Documenta’s Boat, the following questions arose: how do we take into account the histories untold by the historical devices of power; how do we hear the voices that are placed under the audibility of historical investments? The answers to these questions depend upon a movement towards the limits of historicity, namely the limits of the writings of history. A movement that embraces other forms of narrating and archiving and political processes while disrupting hegemonic versions of power, life, freedom and violence.

I am writing this piece from Athens, the city where I came to live since I am part of a year-long residency that has started with Documenta’s “Learning from Athens” project and which will remain in the city as an after-effect of the institutional presence of this mega-event and its interventions in the local culture-making rhythms. So, that is precisely the context I want to confront with the precedent questions, giving the space of this text to an elaboration of and at the limits of narratives and archives, while losing myself in the surrounds of Documenta 14. By “the surrounds” I mean the artistic and political movements that are emerging in and passing by the city with, for, because and against the “intrusion” of this global investment of power.

The last scene of this meditation starts then in the venue of the AR Pavilion. Artists at Risk (AR) is a platform “at the intersection of human rights and art” that provides political help for artists who are experiencing risk in their home countries due to political persecution. The project provides assistance with visa issues and many other procedures, besides offering the space of Safe Haven Residencies across Europe for artistic investigation on topics connected with geo- and body-political tensions across the globe. Curated by Marita Muukkonen and Ivor Stodolsky, the AR Pavilion – a small venue located close to Omonia Square in the city center of Athens – is an exhibition with artworks of Pinar Öğrenci, Erkan Özgen and Issa Touma. It was inaugurated in the very same week of Documenta in Athens, as one of the many parallel events that took place in the city.

My intention here is not to oppose AR initiative to Documenta’s huge investment in the city of Athens, nor to affirm this space as a symmetrical alternative to this mega-event. I believe that AR Pavilion exists by itself and deserves to be considered in its own dimensions and position. Nevertheless, the aim of this text is to pursuit the questions that arose in The Boat of History and, for that reason, the exhibition organized by Artists at Risk appears as a possible framework for discussing the limits of archives and narrative in contemporary accounts on violence, pain and the history of necropolitics. In what concerns this conceptual aim, there are at least two works included in AR Pavilion that I want to consider as tools for thinking on these limits.

The first one is Wonderland (2016), by Erkan Özgen, a short video of a 13 year old deaf kid called Muhammed talking about the necropolitical scenes of the Syrian civil war he has witnessed in Kobanî, the small village in northern Syria where he used to live with his family. Without the ability to hear or talk, Muhammed’s narration of the horrors he has seen breaks the politics of voice that define the dominant historical regime. Since the situated history of violence, in this case, is told through a performative language that brings the entire body of the child to this scene of historical writing, the work goes to the very limit of expressiveness in order to acknowledge Muhammed’s mediation of history as an archiving procedure that challenges radically the notion of archive itself.

The second work is Issa Touma’s 9 days from my window in Aleppo (2012). One of the first sentences pronounced by Touma’s voice in the film is: “Today is the first day of the war in my street.” And then from day one to day nine, with his camera, the artist testifys the events of a war from his window, catching the movement of the armed forces of resistance, the processes of construction and deconstruction of an improvised checking point, the fugitive movement of some neighbors, the resilient staying of others… The film presents itself as a very literal and raw visual statement on how the war inscribes its violence in the daily life of a certain community or group of people, but at the same time it incorporates its own limits, as it is illustrates in the last sentences said by Touma: “This will go on for a long time.” And then: “I don’t want to film the war any longer.”

Issa Touma – 9 Days from My Window in Aleppo. Production: Paradox

Issa Touma’s refusal “to film the war any longer” meets – through the curatorial articulation of the exhibition – Muhammed’s partial re-enactment of his memories of violence, creating thus a shared space of opacity in which the writing of history becomes something always already implicated in its own shadows; some sort of broken movement that consists in the creation of gaps wherein it is possible to proliferate non-hegemonic accounts on history. That way the AR Pavilion insinuates one of the many feasible answers to the emergent questions of Documenta’s History Boat, although it offers no promise of an all-encompassing historicity: For joining this risky movement, it is crucial to jump the boat of history to swim among the sea of narratives that flows in its surrounds.

* This picture was taken during one of the presentations, when Nelli Kambouri was talking about the relations between the containers in the Piraeus port and the reorganization of neoliberal projects in the global capitalism.

Jota Mombaça is a non-binary bicha, born and raised in the northeast of Brazil, who writes, performs and academically studies on the relations between monstruosity and humanity, kuir studies, de-colonial turns, political intersectionality, anti-colonial justice, redistribution of violence, visionary fictions, the end of the world and tensions among ethics, aesthetics, art and politics in the knowledge productions of the global south-of-the-south. Current works are the collaboration with Oficina de Imaginação Política (São Paulo) and the artistic residency along with Capacete’s 2017 at Documenta (Athens/Kassel).